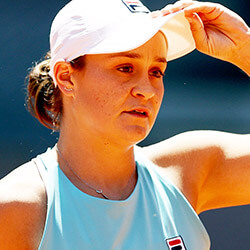 Australian Ash Barty’s shock third-round loss in this year’s US Open may have been helped along by a technical mishap, the world No. 1’s coach has now said.

Commenting on Barty’s shock exit, coach Craig Tyzzer this week emphasised that the revelation isn’t meant to be understood as any sort of excuse from Barty’s team. He however revealed that the decision to change Barty’s racket strings before playing Shelby Rogers (US) is in hindsight considered a technical blunder.

Tyzzer said Barty had struggled to move the ball up and down while going for a spin, which has led to the decision to replace the strings of her racket with full poly. But while this took a great deal of weight off her serve, it proved unideal for Barty’s confidence for the remainder of the match.

While Tyzzer concluded by saying the blunder probably did not cost Barty the match, the seemingly subtle change to her racket may have caused her to lose rhythm. He did however add that the decision to make the in-game change had been his, and not that of the tennis world No. 1.

Barty and her coach reportedly both experienced the conditions at this year’s US Open to have been vastly different to where the Aussie won her fifth title of the 2021 season in Cincinnati. And while Barty’s early exited shocked fans and fellow-players alike, Tyzzer said the Australian still did a great job at getting through the competition.