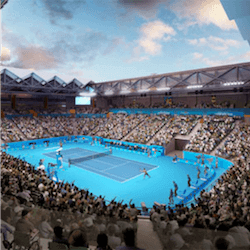 As the controversy continues around Australian former tennis great Margaret Court’s opinions on same-sex marriage, Tennis Australia has announced that it will not be changing the name of the Margaret Court Arena at Melbourne Park.

The tennis body had been urged by marriage equality activists to rescind the honour conferred in the 2003 renaming of the Australia Open venue, following Court’s open letter to Qantas earlier this month, in which she claimed to be boycotting the airline over its public corporate stance supporting equal marriage rights for all Australians.

Court was raised Catholic, but converted to Pentacostalism in the 1970s. Since 1983, she has been an ordained independent Pentacostal minister. She founded the Victory Life Centre in Perth in 1995, at which she is still a pastor.

It’s a very different world to the one in which Court became internationally famous, as the top women’s singles player in the 1960s and 70s, and the 1963 World Number 1. She still holds the record for the most major titles won, at 192, and her career highlights include becoming the first woman in the open era, and only the second in history, to win a Grand Slam, in 1970.

She won 19 Grand Slam singles titles overall, including eight Australian Opens, and in later life she remarked that had she converted to Pentacostalism earlier, she might have won the Melbourne tournament twice as many times.

The remarks that made activists and politicians call for the renaming of the Margaret Court Arena were not quite as benign. In a 1994 prayer breakfast at Parliament House, she deemed homosexuality ‘an abomination to the Lord’. In her May letter to Qantas, she expressed her ‘disappointment’ that the airline had become a ‘promoter for same-sex marriage’, vowing to use other airlines ‘where possible’ when travelling.

In its response, Tennis Australia said that Court’s ‘personal views’ are her own, and that although they do not align with Tennis Australia’s values of equality, inclusion and diversity, the body would not be renaming the Margaret Court Arena, in recognition of her unmatched record as a player.