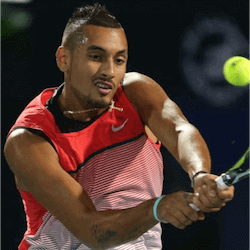 Four tennis fans have demanded that Nick Kyrgios apologise. This comes after events that occurred at the Mexican open, which had more than a few awkward moments that involved Kyrgios shooting off his mouth. The fans claim that Kyrgios verbally attacked them, and should issue an official apology.

The event in question occurred after Kyrgios had been losing against opponent Dudi Sela. Down 6-3, Kyrgios can then be seen turning to the tennis fans and very clearly saying “Shut the f*** up.” This, of course, did not go down well with Sela, and the two entered into what appeared to be a thunderous exchange.

Interestingly, Kyrgios went on to recover from the losses. When the game ended it was he that was the winner, and will be moving on to the next round.

In response to the incident, young Jewish Mexican Isaac Cherem, who Kyrgios had addressed with the foul language, was quick to clarify what had occurred. In a statement to Fairfax Media Cherem said he was indeed a Sela supporter, and claimed he was aware him and his three friends had been whispering during the match, but had not intended to distract or slander Kyrgios in any way.

The four had been sitting very near to Kyrgios, Cherem pointed out, and had whispered to one another, or cheered, only between points, and not when Kyrgios was serving. He said that one of his friends had whispered when Kyrgios had turned and delivered demand that they “shut the f*** up.”

In closing the statement Cherem said that he and his four friends had been scared, given the intimidating size of Kyrgios, and that they were indeed offended, and would like an apology. There has been no word as to whether Kyrgios is considering doing so.

It was after the Kyrgios had addressed Cherem, and had started to wave at other members of the audience in what appeared to be a mocking gesture, that Dudi Sela had approached Kyrgios in what is assumed to be an effort to make him stop. The two then had their heated exchange, although it is not known what exactly is said.

Cherem made a final comment that he was pleased Dudi Sela has stepped in to have a word with Kyrgios bout his aggressive behaviour. He also said that although he thinks Kyrgios is a great tennis player, he doesn’t have the head that is required to be truly good at the game.