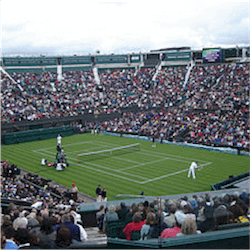 Late February does not see any of the most famous tournaments in international tennis, but there is still plenty of men’s and women’s action around the circuit. Australia’s tennis betting enthusiasts had enough to keep them entertained while they wait for the high-profile European summer tournaments to start.

The women’s tournament in the 2017 Dubai Tennis Championships has been completed, and at the time of writing the men’s competition was still underway. The event presented some top names in women’s tennis, including Angelique Kerber, Karolina Pliskova, Dominika Cibulkova, Agnieszka Radwanska and Garbine Muguruza: respectively, World Nos. 2, 3, 5, 6 and 7 on the WTA rankings.

The women’s singles winner, however, was tournament seventh seed and then-World No. 13, Elina Svitolina. The 22-year-old Ukrainian’s 6-4, 6-2 victory over Caroline Wozniacki in the final boosted her to a career high at World No. 10.

The Dane had the longer route to the final, as the top eight seeds all got a bye in the first round, but the luck of the draw saw that 10th seed Wozniacki didn’t face another seeded player till the final. Svitolina, on the other hand, had to beat tournament top seed Angelique Kerber in the semi-final, which she managed with a score of 6-3, 7-6, winning the tiebreak 7-3.

Men’s tennis fans weren’t neglected in February either, with a tournament in Rio taking advantage of the Brazilian beach mecca’s reputation for perennial sunshine. The Rio Open is an ATP World Tour 500 series event, and it was held at the Jockey Club Brasileiro from 20-26 February.

The 2017 edition didn’t have quite as much Top-10 talent as the women’s field in Dubai, but there were some hard-fought matches on the Jockey Club’s clay courts. The early shock was the loss of the tournament’s top seed in the first round: Japanese ATP World No. 5 Kei Nishikori fell to Brazilian Thomaz Bellucci 6-4, 6-3.

Uruguayan Pablo Cuevas, the defending champion, was also knocked out in the first round. In the end, second seed Dominic Thiem of Austria met Spain’s Pablo Carreno Busta, the fourth seed, in the final. Thiem won the championship 7-5. 6-4.