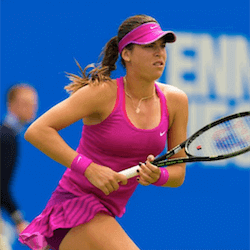 Ajla Tomljanovic provided Australian WTA Tour fans with even more intense thrills in her Round of 16 match of the Hawaii Tennis Open on Wednesday than she did in Tuesday’s straight-sets Round-of-32 win over Kurumi Nara.

Mid-morning Wednesday in Hawaii, or early morning Thursday in Australia, the Croatian-born Brisbanite faced the USA’s Danielle Lao, and looked like she was in trouble immediately. Lao broke the 24-year-old’s service repeatedly to take the first set 6-2.

Undaunted, Tomljanovic returned the favour with a 6-3 comeback in set two. She started the third set looking well in control, breaking the American’s serve twice to go 3-0 up. That’s when the fireworks started: Lao broke the Aussie’s service in the next game to go to 3-1, and Tomljanovic broke right back to make it 4-1.

That set up an epic sixth game, in which Tomljanovic got to 30-0 ahead before Lao came back, eventually forcing deuce and then losing two advantages in her effort to break the Aussie, who eventually won three points in a row to hold serve.

Lao couldn’t hold her serve in the seventh game, and Tomljanovic took the final set 6-1, putting her through to the quarterfinals of the WTA 125K Series tournament. Back from a long spell after a shoulder injury and surgery, she’s become one of the rising stars of Australian women’s tennis.

Australians Crash Out in Mumbai First Round

Tomljanovic’s roaring comeback on Oahu was a bright spot in a week of Australian women’s tennis that was otherwise gloomy. In the other WTA 125K Series tournament running currently, the Mumbai Open, all three Australian competitors crashed out in round one.

Priscilla Hon, another Queenslander, had the misfortune of drawing the tournament top seed, Aryna Sabalenka, for her Round-of-32 opener. The Belarusian put her down in short order: 7-5, 6-1. Sixth seed Lizette Cabrera didn’t live up to expectations against Thailand’s Peangtarn Plipuech, losing 7-6 (7-4), 6-2.

Arina Rodionova, the tournament fourth seed, was Aussie punters’ biggest disappointment. She also succumbed to an unseeded opponent; world No. 265 Amandine Hesse. Once again, two sets were all it took, although Rodionova, like Cabrera, managed to force a tie-break in the first, losing it 7-2. The final score was 7-6, 6-3 to the Frenchwoman.