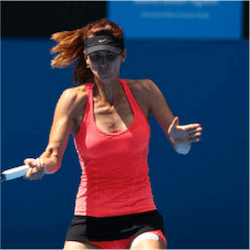 Australia’s best player in the 2017 Hawaii Tennis Open, Ajla Tomljanovic, got through the Round of 32 unscathed on Tuesday, dropping Japanese fourth seed Kurumi Nara in two short, sharp sets: 6-2, 6-2.

The Croatian-born 24-year-old, now a Queenslander but still playing non-Grand Slam tournaments under her birth flag until she sorts out some passport issues, is on the comeback trail after a long spell off the court resting an injury.

A bum shoulder that required surgery put Tomljanovic out in February 2016, and by the end of the year she’d dropped to 930 in the WTA rankings. She’s seeded 11th in the Hawaii tournament, and her commanding win against Nara will have her heading into the next round in a motivated mood.

Han Another Early Casualty Among the Seeds

China’s Han Xinyun, seeded eighth, also saw her Hawaii Tennis Open end early, knocked out in the first round by the USA’s world No. 633, Allie Kiick. The American had to work a bit harder than Tomljanovic, but still took it in straight sets: 7-5, 6-4.

At the time of writing, the top three seeds in the field had yet to play their opening matches: China’s Zhang Shuai, who was last year’s runner-up, Taiwan’s Hsieh Su-Wei and Russia’s Evgeniya Rodina.

Tomljanovic-Kyrgios Seems to Be Back On

Fans with a big interest in celebrity love lives were happy to see Tomljanovic back in action in Hawaii, but for different reasons. It appears her romance with another Aussie tennis great, Nick Kyrgios, is back on.

The couple split last year after Kyrgios misbehaved on a night out during Wimbledon and went partying with two girls in a nightclub, disrupting a two-year relationship. He and Tomljanovic were spotted looking cosy together while she was warming up for her opening match, so presumably all is forgiven.

Australians in Mumbai Yet to Play

The other women’s tennis tournament on this week that’s worth a punt is the Mumbai Open. There are two Australian players in the top eight: Arina Rodionova, seeded 4th, and Lizette Cabrera, seeded 65th.

At the time of writing, however, both had yet to play their opening matches in the tournament.