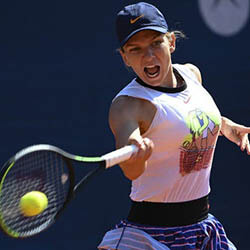 Romanian top tennis seed Simona Halep on Monday became the 6th Top-10 player to withdraw from this year’s US Open for fear of a risk of infection.

Tournament organisers have expressed concerns over more top players withdrawing from the now-controversial competition, and with good reason too. If players such as Serena Williams and Coco Gauff were to follow suit, the event would face a serious risk of losing all personality and would in such a case necessarily have to be cancelled.

But the chaos hasn’t been without its fair share of personal – if undeserved – player benefits. Johanna Konta is only one of several other players to have moved up a position or more on tennis’ latest seedings list.

Halep already before Sunday’s severe beating of Elise Mertens indicated a definite hesitancy over travelling to and playing in New York. The player is clearly unconvinced of her safety – even despite the strict safety precautions rolled out by the United States Tennis Association.

Halep at the beginning of the week announced on Twitter her decision not to compete in this year’s competition, saying that she had weighed up several factors before finally having reached the conclusion that it would be better for her to withdraw. She also spoke about having decided to prioritise her health by instead of travelling to the US, remaining put and continuing with her ongoing training in Europe.

Halep is joined in her decision to withdraw from the US Open by Australian top-seed Priscilla Hon.