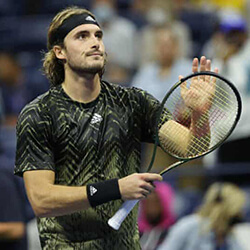 Greek tennis star Stefanos Tsitsipas is starting to take regular rap from the crowds over his long toilet breaks. He recently heard boos from the crowd after he took an extended break to the toilet following the dropping of a set at the US Open during his match against Adrian Mannarino.

The Greek however said on Wednesday that he wasn’t at all bothered by the reaction of the crowd, nor by that of British star Andy Murray two days earlier over the same sort of incident. According to Tsitsipas, he wasn’t breaking any rules by taking advantage of a toilet break and that this was well within his rights as a player.

While the Grand Slam rules of tennis permit players to take a break equal to a reasonable amount of time, they don’t stipulate the exact length of time referred to.

Murray said after Monday’s match that he had lost respect for his opponent as a result of his behaviour. According to Mannarino, however, he believes the fault to lie with the Grand Slam rule-book instead of with his break-abusing opponent. Mannarino on Wednesday killed time working on his serves while waiting on his opponent’s return from the bathroom.

Former US player Sloan Stevens has however added her voice to that of Murray’s. Commenting on Tsitsipas’ extended breaks, Stevens said this week the Greek’s behaviour stressed the importance of certain changes needing to be made to Grand Slam rules due to certain players being guilty of taking advantage of freedoms such as toilet breaks for their own personal agendas.