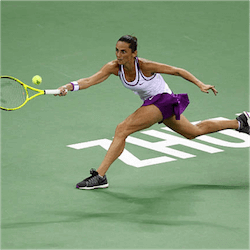 Russian Anastasia Pavlyuchenkova, seeded fourth in the 2017 WTA Elite Trophy, beat eighth seed Angelique Kerber in their opening match of the rounds-robin on Tuesday. The German former World No. 1 fought hard, but Pavlyuchenkova triumphed 6-3, 3-6, 6-2. She didn’t have too long to savour the victory, however; she was due to play new Australian No. 1 and tournament ninth seed Ashleigh Barty just 18 hours later.

The WTA Elite is an invitation-only tournament, and until 6 November some of the top talents in women’s tennis will give Australian sports betting fans plenty of punting options in Zhuhai, China. The 12 competitors, 11 qualifiers and a wild card, are divided into four groups of three, each named after a flower.

Kerber, Barty and Pavlyuchenkova are all in the Rose Group, so Kerber will also have to play Barty, before the winner of the group can progress to the semi-finals.

Vandeweghe and Goerges Win Their Openers Too

The women’s tennis excitement continues in East Asia for another week after the WTA Elite wraps up, as 6 November also marks the start of the WTA EA Hua Hin Championship in Thailand.

The final field is yet to be announced, but it is expected to include Russia’s Evgeniya Rodina as the top seed, along with China’s Duan Yingying, Taiwan’s Hsieh Su-wei, Belgium’s Yanina Wickmeyer, Romania’s Ana Bogdan and Japan’s Misaki Doi.