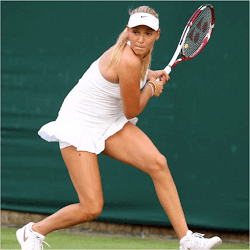 There have been disgruntled murmurs from some tennis fans and commentators following the news that Tennis Australia has awarded a women’s singles draw wildcard entry to Donna Vekic for the Brisbane International starting on Sunday. The 20-year-old Croatian’s admission was part of a deal between Tennis Australia and StarWing, an operation that holds several tennis tournaments in Europe, run by Lawrence Frankopan.

That’s what stirred up the controversy, because Frankopan is also the agent who represents Switzerland’s Stan Wawrinka, currently fourth in world rankings and second seed in the 2017 Brisbane International men’s singles tournament. The 31-year-old Swiss player is coincidentally in a relationship with Vekic, which has prompted accusations of nepotism, and claims that Vekic’s wildcard was a sweetener to ensure the current men’s US Open champion would commit to the Brisbane tournament.

Brisbane International tournament director Geoff Quinlan, however, has denied any such quid quo pro took place. He maintained that the wildcard swap, although unusual, is simply a business deal. In return for Vekic’s entry to the Brisbane tournament, an Australian woman will in the future receive a wildcard entry to one of the WTA tournaments StarWing operates in Europe.

Quinlan pointed to a similar deal that allowed Australian Thanasi Kokkinakis to play in a 2015 tournament organised by International Management Group in Miami. In return, Tennis Australia awarded a wildcard entry into the 2017 Brisbane International men’s singles tournament to Swede Elias Ymer. As a way to give more lower-ranked players more exposure to different tennis conditions around the world, we can expect to see more of these wildcard swaps, as tournament organisers make reciprocal deals; but the motivation, Quinlan claimed, is business, not personal.

At least Daria Gavrilova, the rising star of Australian tennis currently ranked at No. 25, did not lose a tournament place as a result of Vekic’s inclusion: she’s unavailable to play in Brisbane, because she’s competing in the Hopman Cup in Perth. The next Australian woman in the world rankings is Arina Rodionova, ranked 189th, so she can hardly feel short-changed by Vekic at No. 101.