Williams And Federer At The Top of Wimbledon 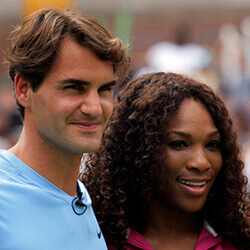 Roger Federer’s winning streak at Wimbledon continues as he lands 26 consecutive streaks as defending champion after he beat Lukas Lacko in his latest game. Serena Williams has been on a similar warpath after seeing victory at her 16th successive win so far at this year’s event.

As Williams and Federer tore ahead of everyone else, Caroline Wozniacki saw defeat against Ekaterina Makarova with a final shock set of 6-4, 1-6. and 7-5.

Federer went on to perform an 89 minute Centre Court Masterclass as the Swiss player finished up with 48 winners and 16 aces with a 6-4. 6-4. and 6-1 victory by the end of the session. The 36-year-old has been on his second-longest win streak at Wimbledon, with his longest being at the 2005 and 2006 finals with a total of 34.

The next challenge for Federer will be against world number 64 German Jan-Lennard Struff who has returned from his two sets down to defeat Ivo Karlovic 13-11 during the final set. Federer, who is currently making his 20th Wimbledon appearance, and who has won 20 majors so far in his career, is looking to become the second player in history to claim nine singles titles at the All England Club, following closely behind Martina Navratilova.

In a statement to reporters, Federer said that he’d played well and felt good on the court, and had less nerves than he’s had in previous rounds in this year’s Wimbledon.