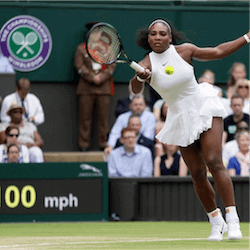 Wimbledon grand slam tennis is already underway, with this week’s qualifying rounds in London. The main draw of the Wimbledon grand slam proper, the third of the four most prestigious tennis tournaments every year, starts on Monday, and it looks like the Ladies’ Singles Championship is going to be riveting this year.

For a start, the women’s title is wide open. Reigning champion Serena Williams is still too busy procreating to be participating, and 2016 runner-up Angelique Kerber has yet to win a tournament this year. Kerber is still World No. 1, but only thanks to the withdrawal of Serena from competition.

However, after crashing out of the French Open in the first round, the first time that has ever happened to a World No. 1, Kerber then withdrew with a hamstring injury from the Birmingham Classic, a traditional grass warm-up for Wimbledon contenders. With betting fans unsure if she’ll even start next week, she has dropped to ninth on the outright odds table, at between $9.00 and $20.00.

Lots of Talent to Challenge Kerber

If Kerber does feel fit enough to play, she faces some stiff competition. Jelena Ostapenko, the eventual winner of the 2017 French Open women’s singles title and, having just turned 20, the youngest since 2004, is heading to Wimbledon hoping for consecutive grand slam wins. Bookies are offering between $14.00 and $16.00 on her.

Petra Kvitova is currently the punters’ favourite to win the Wimbledon championship, at between $4.50 and $5.50. The Czech star is 12th in world rankings, but that’s after a six-month absence from competition, recovering from knife wounds she sustained to her playing hand in a home invasion. Her triumphant return with a championship victory in Birmingham, beating Kristina Mladenovic, Lucie Safarova and Australia’s Ashleigh Barty along the way, bodes well for Wimbledon.

However, World No. 2 Simona Halep is also in contention at Wimbledon, as are Karolina Pliskova, Garbine Muguruza, Venus Williams and Johanna Konta. All five players are attracting a fair amount of wagering action, at odds ranging from $4.50 to $20.00.