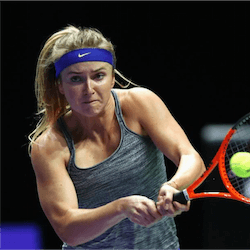 Danish former World No. 1 Caroline Wozniacki delivered a brutal beat-down to the tournament top seed and current WTA No. 1, Romania’s Simona Halep, on Day 4 of the 2017 WTA Finals in Singapore on Wednesday. Wozniacki won their Red Group round-robin clash 6-0, 6-2, making only seven unforced errors in her clinical win.

Halep performed better in her opening match, beating France’s Caroline Garcia 6-4, 6-2. The eighth seed came back on Wednesday, however, in her match against Svitolina. It almost went completely pear-shaped; the Frenchwoman was in tears at a set and a break down after an abysmal start.

Muguruza won her opening match against seventh seed Jelena Ostapenko on Sunday, and the Latvian 20-year-old also went down to a resurgent Williams on Tuesday. With Pliskova dominating the White Group, the biggest battle will be between Williams and Muguruza to finish second in the group.

At the end of Day 4, Wozniacki and Pliskova were almost inseparable in the outright betting to win the tournament, with Pliskova offered at online sites at around $2.00 and under, and Wozniacki at $2.00 and over. Muguruza and Halep were third and fourth, at around $4.50 and $5.00 respectively. At $8.00 and up, Garcia, Williams, Svitolina and Ostapenko all looked like long shots.