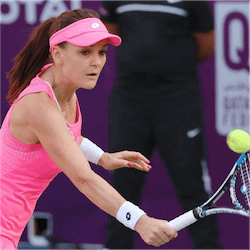 The Qatar Ladies Open, officially called the Qatar Total Open in honour of its loyal sponsor, has been around since 2001, at a time when women’s sports were starting to become increasingly popular in the emirate. It took a break in 2009-10, while Doha’s Khalifa International Tennis and Squash Complex was used for the WTA Tour Championship, another great motivation for the growth in Qatari women’s tennis.

Since 2011, however, the Qatar Total Open has again been a regular fixture on the WTA calendar in February. After the excitement of the Australian Open, the Taiwan Open and the first round of the Fed Cup, the Doha tournament is the next major international women’s tennis event of interest to Australian sports betting fans. This year, the Qatar Total Open runs from February 13-19 at Khalifa, and punters should be impressed by the quality of the singles draw.

Lots of Top-10 Talent on Show

There are 32 players in the main singles draw for the 2017 Qatar Total Open, and no less than seven of them are in the Top 10 of the WTA rankings. The tournament’s top seed is German world Number 1, Angelique Kerber, but she will have to defeat some powerful, skilled opponents to take the title.

Poland’s Agnieszka Radwanska, Number 3, is also in the draw, along with world Numbers 5, 6, and 7: respectively, Czech Karolina Pliskova, Slovakian Dominika Cibulkova, and Spain’s 23-year-old Garbine Muguruza. Russian Svetlana Kuznetsova and the UK’s Johanna Konta round out the Top-10 contestants, at world Numbers 9 and 10 respectively.

The defending champion cannot be ruled out of contention either. Spaniard Carla Suarez Navarro took the title in 2016, and she is currently ranked at Number 12. Only three women have won the Qatar Total Open twice, however: Russia’s Maria Sharapova and Anastasia Myskina, and Belarussian Victoria Azarenka.

Mysinka managed the feat consecutively, in 2003 and 2004, as did Azarenka in 2012 and 2013. So Navarro has all the incentive she needs to outmatch the higher-seeded players, knowing she has a shot at becoming only the third player to take back-to-back Qatar Total Open championships.