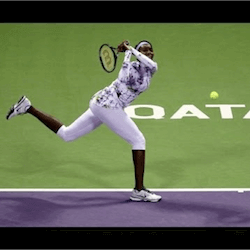 The Qatar Total Open is a hotly anticipated fixture on the tennis annual calendar. The tournament sees some of the best players in WTA tournament rankings making their way to the competition to show what they are made of.  Previous winners include Victoria Azarenka who achieved a fantastic feat in 2012 by winning the competition and then following up the next year in 2013 with a dramatic win which secured her title defence.

Simona Halep went on to win in 2014; Lucie Safarova in 2015 and last year saw Carla Suarez Navarro taking the top spot. Navarro’s participation in this year’s event is uncertain though, she has been suffering with a long-term right shoulder issue and in early January stated that she would be taking some time off for her injury to heal. This recuperation might see her fit enough for the tournament that is looming quite large is sporting circles, but this is highly doubtful.

There are however many more athletes that are in contention to win this event, chief among them being current world number 1, Angelique Kerber of Germany. Kerber will be looking to assert her authority on this event as she finished a respectable second place in the Australian Open just recently.

Ticket sales went online in mid January and this has seen a swift increase in the audience participation projections. The event will be held at the splendid Khalifa International Tennis and Squash Complex from February 13th – 18th and the event is expected to offer US $776,000 in prize money. There will be 32 singles matches for tennis fans to feast their eyes on while 16 pairs will hit the courts in the doubles tournament segment of the Qatar Total Open.