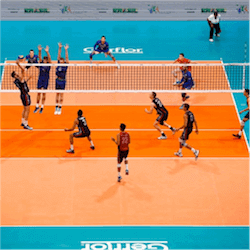 Week 2 of the 2017 FIVB Volleyball World League intercontinental rounds saw the Australian team bounce back from a sad solitary victory in Week 1 to take a clean sweep. Aussie volleyball fans will be delighted with the wins against Slovakia, China and hosts Finland, when the four sides met as Pool D2 in Helsinki from 8-10 June.

The win against China last Thursday started off a dream weekend for the Aussie team, and it was achieved with three unanswered sets: 25-22, 25-13, 25-21. On Friday, they repeated the whitewash against their strongest opponent so far in the tournament, Slovakia, avenging the 3-1 defeat the Slovakians had handed out at home in Week 1. At the rematch in Helsinki, the Volleyroos delivered a 25-21, 25-19, 25-23 equaliser.

After winning the first set in their final Week 2 match against Finland 25-21, however, the Volleyroos gave punters at home a heart attack by crashing to a 14-25 loss in the second set. Happily, they recovered and took the next two sets 25-21 and 25-19, to keep their record for Week 2 intact.

Fifth on the Group 2 Ladder

The Week 2 wins were good news for betting fans backing the Aussie side, but it doesn’t change the team’s current position much. Their performance in Week 1, in which they beat Portugal 3-2 but lost to Slovakia and Japan, has left them in fifth place on the Group 2 ladder, behind Slovenia, the Netherlands, Slovakia and Japan.

Slovenia and Japan both had two wins and a loss in Pool E2 in Week 2, while the Netherlands took a clean sweep of Czech Republic, Portugal and Egypt in Pool F2. However, with Australia only four points behind Slovenia at the top of the Group 2 ladder, the remaining weeks of the intercontinental rounds will be crucial.

Their upcoming matches this weekend, against Japan, China and Turkey, will be intensely competitive – even though as the host of an intercontinental finals round, scheduled for Gold Coast’s Carrara Indoor Stadium on 24 and 25 June, the Aussie team is assured a place in the intercontinental semi-finals.

There are three groups of 12 teams each in this, the 28th edition of the FIVB Volleyball World League, FIVB’s richest international men’s tournament. The Volleyroos need to stay on their winning streak, if they are to make it all the way through to the World League finals round from 4-8 July.