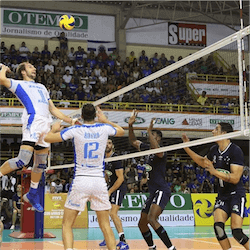 Poland Gets to Showcase Three Arenas

Thanks to satellite television channels and live streaming online, international sport is being hosted in many countries that previously wouldn’t have been considered to present a major tournament, because the size of the local fan base in the region is no longer that important a criterion.

Poland is the latest country to benefit from the expansion of world championships into a more diverse range of hosts, and the 2017 FIVB Volleyball Men’s Club World Championship gives the Eastern European nation a chance to showcase three of its multipurpose arenas to the world.

Pool A play their pool matches in Hala Okraglak, a 3,500-seater in Opole. Pool B start off under another impressive dome, the 12,100-seater Atlas Arena in Lodz. With the pool stages out of the way, the final round of the tournament moves to Poland’s most impressive new stadium: the basket-shaped Tauron Arena in Krakow, completed in 2014, that can hold more than 14,000 people.

Two Polish Teams Among the Eight

As host of the championships, Poland get automatic entry for its current club champions, so reigning champs ZAKSA from the town of Kedzierzyn-Kozle head up Pool A. One of the tournament’s two wild cards also went to Poland, putting PGE Skra from Belchatow through in Pool B.

Along with ZAKSA in Pool A are Italy’s Cucine Lube from Civitanova, Brazil’s Contagem-based Sada Cruzeiro, and Iran’s Sarmayeh Bank from Tehran. Joining PGE Skra in Pool B are Zenit Kazan from Russian, Argentina’s Personal Bolivar, and the other championship wild card, Shanghai Golden Age from China.