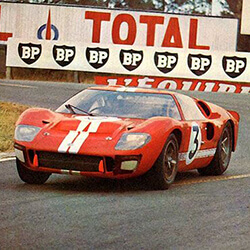 The 1966 Le Mans 24 hour race saw the first win for Ford since the dawn of the race, with their Ford MkII coming in third in the famous 1-2-3 finish. The car, which became legendary overnight, and saw Ford being celebrated across the racing world, is now up for sale, with an impressive asking price of $12 million.

The MkII was driven by American duo Dick Hutcherson and Ronnie Bucknum, where they closely followed second place winners Ken Miles and Denny Hutme. First place for that year belonged to Bruce McClaren and Chris Amon.

Alexander Weaver, RM Sotheby’s car specialist has told reporters that the P/1016, the chassis of that specific car, changed the history of motorsport as we know it. He went on to say that the Ford has been restored to the condition it was originally raced in, which will provide extra incentive for potential buyers. Lastly he said that there are few other cars that quite match the same gold standard as this reconstructed Ford, and that it always be regarded as one of the Fords that beat Ferrari.

Despite its win in 1966, and a V8 that could produce 485 break horsepower, the car was plagued by mechanical woes, especailly sability and straight-line instability problems. After winning the Le Mans, the car would go on to win the “People’s Choice” award as the Pebble Beach Concours in 2003 before it underwent its restoration and being set on the market.