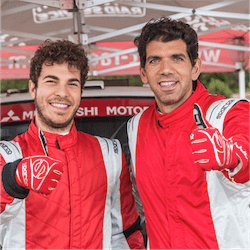 The Dakar is famed for being the toughest off-road endurance rally in the world, and since it moved to South America, the entire route seems to pit the drivers against pitiless deserts or merciless mountains. It’s a gruelling test of stamina, and it takes drivers who are always ready to push on through adversity.

Which makes it fitting, and oddly satisfying, that the next national flag to be added to the Dakar line-up is that of Lebanon, a land whose people have learnt a lot about soldiering on through adversity over the past 70 years. Lebanese racing driver Jad Comair and his co-driver Antoine Iskandar will be taking on the 2018 Dakar in a Buggy BV6.

The two have just spent six months training in the Sahara Desert, near the town of Merzouga, striving hard to get enough preparation in to ensure they finish the race. For first-timers, that would be a victory in itself, given the Dakar’s brutal disregard for novices.

Comair and Iskander are using the buzz generated in the Lebanese media by their inclusion to promote an NGO supporting people with disabilities called Anta Akhi. They’re encouraging their supporters to donate to a campaign called #BeTheDrive.

The Dakar, owned by the Amaury Sport Organisation, dates back to 1979, when it was inaugurated as a grand parade through former French colonial possessions in Africa as the Paris-Dakar. It started in the French capital and ended in the capital of Senegal, crossing mountains, the Mediterranean and the Sahara Desert along the way.

For the first time in its history, the race was cancelled in 2008, when instability in Mauretania, one of the countries on the original route, may have posed a threat to drivers and race officials. It resumed in 2009 in South America, with a route that changes every year to allow different South American nations to host stages.

Buenos Aires hosted the 2009 opening, and to date Argentina, Paraguay, Bolivia, Chile and Peru have all featured on the route, with Argentina hosting by far the most stages.

The 2018 Dakar will start in Lima, Peru, on January 06, run through the Atacama Desert and up the Andes Mountains into Bolivia, then over more Andes into Argentina, to finish in Cordoba on January 20.