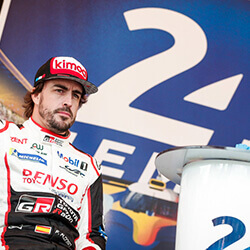 Alonso, famous Formula One two-time winner, arrived in Le Mans ahead of his debut as he gears up for one of the world’s most prestigious races.

The racer has had some disappointments lately, especially at his 300th grand Prix weekend when he was forced to retire while sitting at tenth place. This was due to his an exhaust problem that saw him eventually having to leave the track.

His new duties will see him switch over to Toyota duties, which will be taking place at the Circuit de la Sarthe. He will be accompanying former F1 Drivers Sebastien Buemi and Kazuki Nakajima as he attempts to conquer his current challenge: the Triple Crown. This consists of the Indy 500, the Monaco Grand Prix, and Le Mans.

The Spaniard did some some victories in April when he won the World Endurance Championship debut, which took place at Spa-Francorchamps. He is set to take part in the WEC races alongside McLaren, who are currently his F1 commitment.

Alonso’s future in the F1 circuit is still undetermined, and it’s unknown whether a full-time switch to IndyCar or WEC is in the works, although McLaren is currently considering an entry to IndyCar. He is also not the only former F1 driver that will be making his first debut at Le Mans this year. Jenson Button is also gearing up for his first Le Mans, and the 2009 champion will be in the LMP1 class, representing SMP Racing.