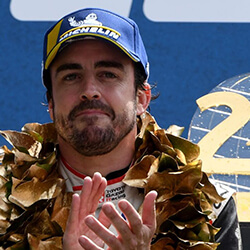 Fernando Alonso has come first in the Le Mans 24 Hours for the second time in his career, where he ended the race alongside Toyota teammates Sebastian Buemi and Kazuki Nakajima. The Spanish former Formula 1 world champion took the lead with just an hour to go, and was named the world endurance champions alongside his team.

37-year-old Alonso shared the car with fellow Former F1 drivers Nakajima and Buemi. It finished with a one two for the Toyota, with their number seven TS050 Hybrid, which featuring British Mike Conway in second place. The number seven car, which was crewed by Jose Maria and Kamui Kobayashi, was in the lead for much of the race until they suffered two punctures.

Talking to reporters, Alonso said that car seven was quicker than them for 24 hours and that they really deserved the trophy, but that luck had decided that him and his team would take it instead. He continued by saying that sometimes luck does play a part in motorsport, and that they feel extremely lucky because maybe they didn’t deserve the win.

The number eight car pushed past the finishing line just 17 seconds clear of car seven after 385 laps and an 8467 mile circuit. Alonso’s former F1 teammate, Stoffel Vandoorne, was part of the team that placed third in the number 11 SMP Racing BR Engineering vehicle. It’s the second even that Toyota has won a sports car race.