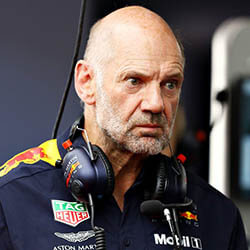 Famed Formula 1 designer Adrian Newey will be leading a team in the Extreme E, the latest environmentally conscious racing series. The 60-year-old designer will be the lead visionary for the Veloce Team once the series starts at the beginning of 2021. Newey is the chief technical officer of Red Bull Racing, and has designed cars that powered Sebastian Vettel to a total of four F1 titles between 2010 and 2013.

Extreme E will have 12 different teams and drivers race in fully electric 4×4 SUVs, with organisers recently announcing that Greenland will be one of their five racing locations. Newey told reporters that the series is a great platform for drawing more attention to the many challenges that the earth is currently facing. The Englishman has created cars for both McLaren and Williams, specifically during their most successful years n the 90s.

Along with Newey, Veloce, who are associated with the Veloce Esports Company, have also named the designer’s son Harrison Newey and Jean-Eric Verna as two of the five co-founders. Extreme E was first founded by Formula E chairman Alejandro Agag with the hopes of putting more focus on climate change in five remote locations around the world. These include the Arctic, the desert, the rainforest, an island in the Indian Ocean, and the Himalayas. Experts from Cambridge University will be joining in with the series in order to conduct research and to try and begin restoring some of the areas that have been damaged.