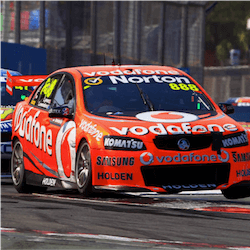 Even 2016 champion Shane van Gisbergen reckons he doesn’t stand a snowball’s chance in hell of winning the Virgin Supercars Championship again this year, but Chaz Mostert reckons all four drivers within 300 points of ladder leader Fabian Coulthard at this point are still in with a shot, including the defending champion.

On Wednesday, the Prodrive Racing Australia driver told a reporter that he believed anyone inside the 300-point mark of Coulthard’s 2,431 still had a chance to take the championship. Mostert lay fourth on the ladder with 2,208 points, behind Coulthard’s DJR Team Penske teammate Scott McLaughlin on 2,334 and Triple Eight Race Engineering’s Jamie Whincup on 2,340.

Van Gisbergen lay fifth on 2,142, or 289 points behind Coulthard. With three two-leg events left in the 2017 championship, offering a total of 900 points over six races to the winners, Mostert may have a point. A lot will depend on how all these contenders fare in Saturday and Sunday’s Vodafone Gold Coast 600 at Surfer’s Paradise Street Circuit.

McLaughlin Focused on Fighting Back

Despite Mostert’s optimism, Van Gisbergen, who has won just three races in 20 this season, admitted to an interviewer that it would take a miracle now for him to take the title a second year in a row. For the Gold Coast 600, he’s focused instead on supporting his teammate Whincup, who needs to fight back from a disastrous 20th place in the Supercheap Auto Bathurst 1000 endurance event on 8 October, if he’s going to haul in Coulthard.

McLaughlin would’ve been gutted when engine failure in Bathurst forced his retirement. Despite winning six races this season, more than any other driver, the New Zealander was dumped into third by his no-points finish, within striking distance of Mostert. He appeared unfazed in recent appearances, however, so he may still challenge strongly.

Coulthard was the favourite at online betting sites to win the Gold Coast 600 Race 1 on Saturday, at $2.60, but Whincup and McLaughlin were jointly reckoned close contenders at $2.75. Mostert, at $34.00, and Van Gisbergen at $81.00, were the drivers most likely to produce an upset.