Ogier Could Seal WRC in Wales 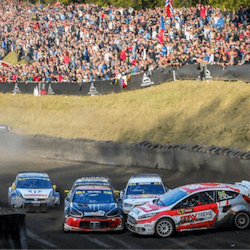 There are only two rallies left in the 2017 World Rally Championship: the 73rd Wales Rally GB from Friday to Sunday through the misty, muddy forests of northern Wales, and the 26th Rally Australia starting here at home on 17 November in Coffs Harbour, NSW.

Both events will be vital to Hyundai Motorsport driver Thierry Neuville and his co-driver Nicolas Gilsoul. After 11 rallies in their Hyundai i20 Coupe so far this year, the German pair in Car No. 5 are lying third in the Drivers’ and Co-Drivers’ Championship, on 160 points each.

In first position is M-Sport World Rally Team’s French duo, Sebastien Ogier and Julien Ingrassia, on 198 points each in Car No. 1. They’re 37 points ahead of Car No. 2, another M-Sport team, Ott Tanak and Martin Jarveoja from Latvia. Both teams are driving Ford Fiestas.

The Latvians are on 161 points each, and with each rally winning the victors a maximum of 25 points, neither Tanak nor Neuville have much hope of overtaking Ogier in the two events remaining.

First Out of Reach; Second the Tussle

Unless the Frenchman now falls prey to two catastrophes in a row, and either Neuville or Tanak can take a win in one and a podium in the other as well, Ogier and his co-driver have the championship in the bag this year. The M-Sport team, on a combined points tally of 358 compared to Hyundai’s 275, is also looking set to claim the Manufacturers’ Championship.

But what will keep punters entertained on Friday, Saturday and Sunday as the drivers plough through soggy autumn Welsh woodlands, presuming Ogier does avoid disaster, is the battle for second place between Tanak and Neuville.

Odds are not yet available for the Wales Rally GB at online sports betting sites, but Ogier is heavily odds-on to win the 2017 WRC outright, at $0.02, with Tanak at $14.00 and Neuville at $16.00. The odds for all three should be a lot closer for the Welsh rally, although Ogier is likely to remain the favourite.

Finns Jari-Matti Latvala and co-driver Mikka Anttila in Car No. 10 could also provide some thrills on the weekend. The Toyota Gazoo Racing duo lies fourth with 123 points each, so they will be trying to pull off a long shot, in the slim hope of challenging in Australia for either third or second place on the final championship ladders.