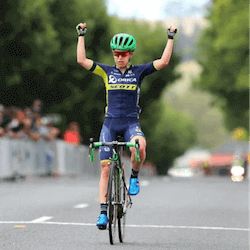 Australia’s Amanda Spratt has successfully defended her original lead to win the Santos Woman’s Tour on Tuesday night. The final stage at Victoria Park in Adelaide included an hour-long criterium as well as two additional laps. The 1,2km circuit was a fast and flat race creating the potential for a bunch sprint. But despite the conditions, Spratt stayed out of trouble, kept her head down and managed to hold onto her lead to take the overall title.

Spratt, riding for Orica-Scott won the overall tour in a total time of 6hours, 59 minutes and 36 seconds. She finished 25 seconds ahead of her nearest rival Janneke Ensing riding for Ale Cipollini and a whole 40 seconds ahead of third place Kirsten Wild. In the early stages of the criterium, it was Alexis Ryan riding for Canyon-Sram who secured the best young rider jersey after doing some impressive attacking in the immediate sprints.

Despite their best efforts, no one was able to dethrone Amanda Spratt. The Orica-Scott captain won the opening stage of the tour and held her lead for the rest of the tour. A solid team effort from Orica-Scott protected Spratt’s overall lead, showing that they are a force to be reckoned with. Spratt started at 22nd in stage 4 bunch sprint and finished a clear 25 seconds ahead of Janneke Ensing in the general classification. Despite winning state 4, Kirsten Wild had to settle for third place.

Her latest tour win has given Spratt a perfect start for the 2017 season whose aim is to take the title in the Ardennes classic later on in the year. Sprat’s impressive performance saw her lapping the field to win race 2 of the Bay of Classic series. She also picked up a second place finish along with teammate Katrin Garfoot at the Australian Championships road race. Spratt will aim to defend her title at the prestigious Cadel Evans Great Ocean road race the end of the month.