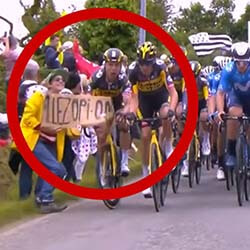 This weekend’s Tour de France race had a smashing because of a spectator holding their sign in the wrong direction. The person has since vanished, and French police are still trying to find them.

The spectator appeared oblivious to their actions, however, their simple mistake caused havoc on one of the globe’s most-watched cycling events. The spectator was trying to get their 15 seconds of fame and stepped onto the road to get onto televisions.

With only 45 kilometres left in the race, the sign holder disrupted the road that had a domino-like effect resulting in riders falling or getting caught behind the mess of it all. Only a few of the riders managed to miss the chaos.

The mystery sign holder faces possible legal action and could even spend time in prison. A case of “deliberately violating safety regulations and so causing injuries that might prevent someone from working for up to three months” has been opened by French prosecutors.

Tour organisers ASO will also be pressing charges. This will be done as a warning and to ensure that spectators do not spoil the event for all those involved. The mystery spectators have received a ton of backlash on social media, which is to be expected all things considered.

Unfortunately, once the race had begun again, 7.5 kilometres down the line another major crash occurred sending riders flying. With so much time lost during the race, some of the biggest names saw a loss in position while other riders used it to their advantage to climb the ranks. Three riders had to abandon the races because of the crashes.