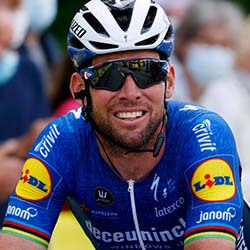 British cyclist Mark Cavendish is inspired, rejuvenated, and ready to turn back the clock to a time of winning.

While Cavendish at the beginning of 2021 believed this year to be his last, that was before he went on to win an impressive four stage wins as well as the green jersey at the recent Tour de France.

Whether or not he’ll be racing with team Deceuninck-Quick-Step in 2022 remains uncertain. But while the negotiations regarding his home team for another year are ongoing and not yet settled, Cavendish is convinced his next will be the year he shows himself to be even better than before.

The 36-year-old, who is currently preparing to compete in the next stages of the Tour of Britain, says he remains hopeful of re-joining Deceuninck-Quick-Step next year. And while he says he’s feeling confident about being on an upward incline in terms of his performance right now, he realises the decision regarding the team and his position isn’t up to him.

Cavendish may very well be taking his cautionary cue from team manager Patrick Lefevere, who recently admonished the Brit about getting too carried away by his platinum performance at the Tour de France. Since Dutch rider Fabio Jakobsen is back in the champion’s seat after a bout of serious injuries, Cavendish is no longer considered a few and far between type of option for 2022.

But whatever happens with tour and team, Cavendish says he feels he could still make progress in the near future. Right now, his goal is to return to a place of consistent winning and returning to a place where losing simply wasn’t part of the deal.