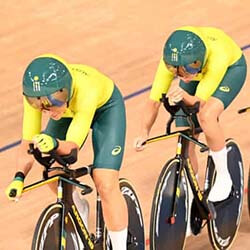 Monday saw Australia’s track cycling teams off to a difficult start when a crash and a slow qualifying time – respectively – left both the men and the women with some serious catching up to do if either are to have any hope of bringing home the bronze.

For the women the action at the Izu Velodrome amounted to nothing short of a horror-opening. Their sluggishly slow qualifying time left them officially contending for only just a place on the podium this year, and no chance of touching the gold for Australia. The men, meanwhile, were first left in the lurch by a time-devastating crash before putting up a time marginally outside of the top four. This obviously means their push, too, will be for an attempt of making it into the league of the bronze – and no better.

But more than just a devastating day at the Olympic races, Australia’s track cycling program has experienced a difficult and challenging decade. Following their initial flying high as a premium and reliable act of the country’s Olympic medal count, their performance took a serious nose-dive at the London 2012 Games, with Rio 2016 having proved not a single gold medal better.

What remains for sure now is that much work is left to be done by the women’s team following Monday’s sluggish and sheepish start. And as for the men, theirs will be a final push for the bronze on Wednesday during the conclusion of this year’s race for the Olympic podium.