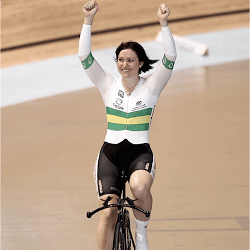 Anna Meares, Australian woman’s cycling superstar has officially announced her retirement from the world of professional cycling. The dynamic thirty-three-year-old rider has called it quits just a few months after picking up a bronze medal in the keirin event at the Rio Olympic Games. Meares is an 11-time world champion, having racked up a total of six Olympic medals for Australia. The announcement however did not come as too much of a shock to the cycling community, as she has been competing with an injury since 2008 and has fought hard to stay on course.

In January of 2008 while competing on Los Angeles, Meares fractured a neck vertebra in a horrific crash on the track. It was later discovered that if the crack had been slightly longer, Meares would have been left a quadriplegic, or killed instantly. Showing incredible determination and single-minded focus, the Australian track star went from a wheelchair to picking up a silver medal in Beijing, all within seven months.

Since then, Meares has been living and competing in pain on a daily basis. The tenacious athlete needed a total of six cortisone injections just to be able to compete in Rio. Speaking to the press about her decision to retire, Meares said that she was proud to have stuck around for this long. She told the public that she felt proud to have achieved all that she had done, and is happy to step away from cycling and try something new and different.

A Legacy for all Australians

Anna Meares leaves behind a legacy that few will ever be able to match. Currently Meares holds the record for the most medals won by a female cyclist. Her tally of 27 medals includes two gold’s, and four silver medals from four separate Olympic Games. Anna is also the only track rider to wear rainbow jerseys in all four cycling sprint disciplines. Her accolades continue as she was officially the first woman to break the 34 second barrier and the 33 second barrier in the 500m time trial.

Nick Green, Australia’s Cycling chief executive praised Anna’s contribution to the sport. Speaking to the press he said that her contribution the world of cycling was immeasurable. He went on to explain that her results at the common wealth games and the world champs were second to none. She was the epitome of strength and professionalism and inspired the nation to rally behind her with every race.