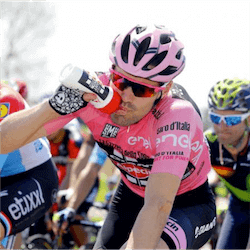 After 13 days of racing with only three rest days between them, the end is in sight for the cyclists riding Giro d’Italia 100, with the race scheduled to finish in Milan this Sunday. Dutch cyclist Tom Dumoulin finished Stage 15 last Sunday still in possession of the maglia rosa, and Australian cycling fans and online betting enthusiasts will be eager to see if he can hang onto that lead through the final week.

Dumoulin has been among the stars of this 100th Giro, alongside Colombia’s Fernando Gaviria, who is dominating the sprints in his first Grand Tour. Gaviria has so far won Stages 3, 5, 12 and 13, giving him the highest points tally in the race, and the mauve maglia ciclamino.

However, Dumoulin hung onto the pink jersey last Sunday, despite losing Stage 15 to Luxembourg’s Bob Jungels. The Dutch rider still has the best overall time in the race, even though he has won only two stages of 15 so far: an individual time trial from Foligno to Montefalco last Tuesday in Stage 10, and again in the 131km Castellania to Santuario di Oropa leg in Stage 14 on Saturday.

The Stelvio May Claim Another Victim

Tuesday, 23 May sees Dumoulin face his biggest threat in the Giro’s final week. The Stelvio is a pass near the Swiss border, full of steep inclines and switchback mountain climbs. At the time of writing, the peleton were attempting to conquer it, twice, in Stage 16 from Rovetta to Bormio.

Last year, the Stelvio was what killed the Giro-winning hopes of Dumoulin’s countryman, Steven Kruijswijk, when he lost the lead to Vincenzo Nabili. The Sicilian went on to win the 2016 Giro, and this year he is again close behind the leaders as they go into Stage 16.

If Dumoulin does fail to conquer the Stelvio and Nabili manages to draw ahead again, he could be in line for his second Giro title in a row. But Colombia’s Nairo Quintana could also still eclipse Dumoulin in the final week; he finished second in Stage 15 and reduced the Dutchman’s overall lead to two minutes, 41 seconds.