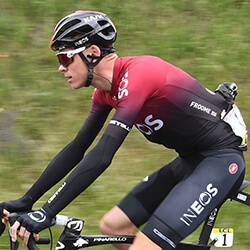 British four time Tour de France champion Chris Froome suffered a fracture to his femur, his ribs, and his elbow during a high-speed crash that saw him left in critical condition. The collision means that Froome will no longer be able to take part in this year’s Tour de France.

The 34-year-old rider, who is part of Team Ineos, hit a wall at 54km/h when he had his hand off of the handlebars during the fourth stage of the Criterium du Dauphine. The cyclist was immediately airlifted to the St Etienne University Hospital where he underwent surgery.

David Brailsford, the team principal, told reporters that even though they recognise that there are some risks in the sport, it’s always traumatic when a rider crashes and has serious injuries. He added that one of the things that sets Chris apart from others is his resilience and strength, and that they will continue to support him during his recovery and to assist him in his pursuit of future dreams and goals.

Froome was in eighth place in the event, which takes place over a period of eight days. The crash took place while the rider was taking part in a practice ride, which was comprised of 26.1 km that took the riders through Roanne, France. Froome would have been chasing a fifth victory in the Tour, a new record, which starts at the beginning of July in Brussels, an event that he wasn’t able to win last year.