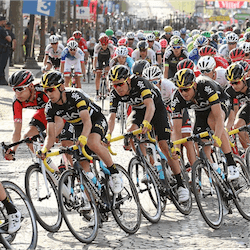 The final three stages of the Tour de France this weekend are going to keep Aussie cycling fans glued to the action, as local boy Michael ‘Bling’ Matthews makes his bid to win the points classification. The 26-year-old Team Sunweb rider took his second stage win of the 2017 Tour, and the third of his career, in Stage 16 on Tuesday.

Fierce cross-winds throughout the 165km flat stage saw several contenders losing time, including German sprinter Marcel Kittel. The Quick-Step Floors rider held the green jersey at the start of Stage 16, but Bling’s win closed the points gap. When Kittel was forced to withdraw after being brought down in a pile-up just 19km into the mountainous Stage 17 on Wednesday, injuring his right shoulder, Matthews took the lead in the Points Classification.

He finished Thursday’s Stage 18, with a hard climb to Col d’Izoard, still in the green jersey. He’s on 364 points, 160 points clear of his nearest rival, Lotto-Soudal’s Andre Greipel. With two flat stages ahead on Friday and Sunday, and an individual time trial in Marseille on Saturday, the Canberra sprinter is now a huge odds-on favourite to win the PC.

Team Sky rider Chris Froome has won the General Classification for two years running, as well as in 2013. After regaining the yellow jersey from Astana’s Fabio Aru in Stage 14, the British rider has clung to it doggedly. He’s also now an odds-on favourite to win his fourth GC title.

However, Froome is at around $0.04 to win the Tour; as opposed to Matthews’ odds of $0.004 to finish in the green jersey. That’s because the Englishman ended Stage 18 only 23 seconds overall ahead of France’s Romain Bardet, riding for La Mondiale.

Cannondale’s Rigoberto Uran is 29 seconds behind Froome, and the Colombian is the GC second favourite at $14.00, with Bardet at around $50.00. So Froome will have to be at the top of his game constantly over the final three days, if he is to hold them off.