Contenders for Vuelta a Espana 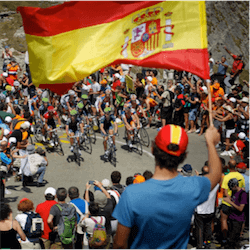 The last time a cyclist managed to win both the Tour de France and the Vuelta a Espana in the same year, the Vuelta was still the earliest Grand Tour of the season. Only two men in history have managed the feat, both French: Jacques Anquetil in 1963, and Bernard Hinault in 1978.

So if Team Sky’s Chris Froome can pull off a win in Spain this year, he will not only become the third cyclist in history to win a Tour-Vuelta double, he’ll also be the first British rider to achieve the distinction. Froome is the clear favourite in online betting, with sites offering between $0.70 and even money on him winning the General Classification.

However, the Brit faces plenty of competition when the race starts this Saturday. The first stage is a team time trial in Nimes, France; only the third time that the Vuelta had begun outside Spain. On Stage 3, however, when the race passes into Andorra, the mountain stages start.

There are three hilly stages, five medium mountain stages and six mountain stages along this year’s 21-stage route, so Froome will be facing challenges from climbing specialists for two-thirds of the race.

The Contenders to Consider

Australian punters trying to pick the team to deny Froome the double have several options. Vincenzo Nibali, at $3.50 and up, is reckoned his biggest threat. The Bahrain-Merida rider won the Vuelta at his first appearance in 2010, and was placed second in 2013, but his biggest recent win was the Giro d’Italia in 2016. He’s going to have an advantage among all those mountains, though.

Another Italian Froome will have to watch out for, is Team Astana’s Fabio Aru. He’s also won the Vuelta before, in 2015, and he was briefly in the lead in this year’s Tour, until the loss of several teammates left him without support. Betting fans can get between $12.00 and $21.00 on him at present.

Three-time Vuelta winner, Trek-Segafredo’s Alberto Contador, could be especially dangerous: he’s an all-rounder, so the mountains hold no terrors for him, he’s riding on home turf, and he’s announced his retirement after this race, so he’ll be giving his all to go out with a bang. The winner of seven Grand Tours, whose record would be nine if his 2010 Tour and 2011 Giro wins hadn’t been disallowed for doping, is at $5.00-$12.00 in the betting.