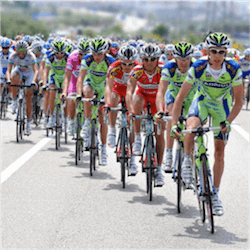 If it hadn’t been for two World Wars, the iconic Giro d’Italia would have celebrated its 100th anniversary in 2009. As it is, two four-year interruptions during hostilities pushed the centenary back to this year. To celebrate, race organisers RCS Sport planned a special route for the 2017 Corsa Rosa, starting in Sardinia and covering 3,572km as it passes through 17 of Italy’s 21 regions from 5-28 May.

The presence of Sardinian cycling star Fabio Aru was a bonus, expected to spark even more interest from the island’s locals in the opening stages of the race. The 2015 Vuelta a Espana champion finished third in the 2014 Giro and second in 2015, so he and his home-ground fans were hoping he could make it to the top of the podium this year.

Unfortunately, while training at altitude in Tenerife a few days ago, Aru had a crash that left him with a bloodied and swollen knee, and subsequent bursitus. His withdrawal from the Giro has gutted Italian cycling enthusiasts.

Australia’s online betting fans shouldn’t have a problem finding riders to back, though, despite the loss of Aru. Nairo Quintana is still scheduled to race, and after his blazing spring, he is the odds-on favourite. He is currently getting his training in for the Giro’s gruelling mountain stages back home in Colombia, so he should be in peak condition next month.

With Dutch riders Tom Dumoulin and Steven Kruisjwijk also racing, along with Welshman Geraint Thomas and Canadian Michael Woods, Quintana will face some stiff competition. Although there are several flat stages to this year’s Giro, including the final time trial to the finish line in Milan, it’s the mountaintop finishes and mountainous stages that will test riders to the limit. The toughest leg of the race is expected to be Stage 16, which doesn’t have a mountaintop finish, but will require traversing the Mortirolo Pass and Selvio Pass (twice!) within 227km.