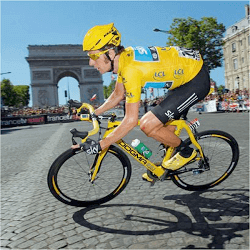 Cycling fans the world over got a surprise to finish off 2016: English legend Sir Bradley Wiggins announced his retirement on December 28. It brings to an end a career that included multiple world records, five Olympic gold’s out of eight Olympic medals overall, and the distinction of being the first British winner of the Tour de France.

Made a Commander of the British Empire in the New Year’s Honours list of 2013, the Kid from Kilburn has always presented a delightful contrast to cycling enthusiasts: a tattooed, dedicated mod from a working-class housing estate in north-west London, elevated to knighthood and rubbing shoulders with the nation’s elite.

His quick sense of humour and chirpy remarks at press conferences have endeared ‘Wiggo’ to fans worldwide, but he isn’t afraid to return to his blunt-speaking roots when he feels the need. Who can forget the tirade of invective he launched at journalists bringing up doping allegations yet again, during his historic 2012 Tour de France?

Records and Championships on Track and Road

The doping charges that have plagued Wiggins in the final years of a 19-year career are somewhat overblown. According to his doctors’ certificates, the corticosteroid triamcinolone that he takes for asthma is permitted under a therapeutic use exemption. The usually cheerful rider’s foul-mouthed 2012 outburst reflects his frustration at critics’ refusal to accept this.

It is unlikely that past few years’ controversy will dim his legend, however. In June 2015, he set a new Men’s UCI Hour record at the Lee Valley VeloPark in London of 54.526km; a world-best that still stands. He also holds the Team Pursuit record, in both the World Championship and the Olympic Games. It’s a record he broke twice in Beijing in 2008, and twice again in 2016 at the Rio Olympics.

He’s one of the few riders who has proved as effective on the road as he is on the stadium track, with multiple stage wins from 2005 to 2015 in the Tour de France, Giro d’Italia and Vuelta a Espana to add to his 2012 Tour de France triumph. In the velodrome, he holds a slew of championships and medals, in both Individual Pursuit and Team Pursuit, along with the Hour record. Fittingly, the final race of his career, the Six Days of Ghent in November 2016 with teammate Mark Cavendish, also produced a win.