Dumoulin Hangs on in Giro d’Italia 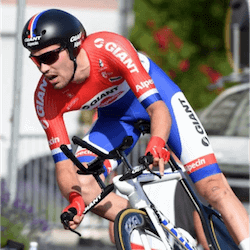 Australian sports punters have just enjoyed three-and-a-half weeks of top-class cycling in the 2017 Giro d’Italia, the 100th edition of the iconic tour around Italy. By the start of the final week, Team Sunweb rider Tom Dumoulin had already worn the maglia rosa through six stages, despite winning only Stages 10 and 14.

At the start of Stage 16 through Lombardy last Monday, experts were predicting that the mountains of northern Italy would put the Dutchman under great pressure. Sure enough, Italy’s Vincenzo Nibali won Stage 16, followed by France’s Pierre Rolland in Stage 17 and American Tejay van Garderen in Stage 18.

Meanwhile, Colombia’s Nairo Quintana, winner of the 2014 Giro, had been finishing well enough at every stage to take the maglia rosa from Dumoulin in Stages 19 and 20, as the mountains took their toll. However, in Sunday’s final-stage time-trial to Milan, Dumoulin put on a great sprint to finish second to his countryman Jos van Emden, riding for Team LottoNL-Jumbo.

Quintana and the other contenders finished far enough behind Dumoulin to put him back in the maglia rosa, making him the overall winner of the 2017 Giro d’Italia. In the maglia ciclamino, which he had held since Stage 5, Colombian Fernando Gaviria was the winner of the points classification for Team Quick-Step Floors.

Quintana’s heroics in the mountains left the Movistar cyclist in overall second place for the general classification. Third place went to Nibali, riding for Bahrain-Merida, while FDJ’s Thibaut Pinot of France was fourth, ahead of Russia’s Ilnur Zakarin, riding for Katusha, in fifth.

Dumoulin was also King of the Mountains in Stages 14 and 15, thanks to his Stage 14 win; although the maglia azzurra was actually worn in those stages by Spain’s Omar Fraile in second place, as Dumoulin was already wearing the pink jersey. However, Team Sky’s Mikel Landa asserted his dominance in the mountains from Stage 16 onwards, and the Spanish cyclist finished in the blue jersey as the overall winner of the mountain stages.

The white jersey to the overall winner of the young riders classification went to Luxembourg’s Bob Jungels, riding for Quick-Step Floors. He held the maglia blanca for 14 stages of the race.