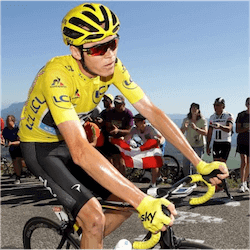 Due to the nature of this year’s Tour De France route, Britain’s Team Sky thinks that riders will be facing a tough challenge to snatch some time in each of the stages. Traditionally teams would use their strengths in either of the mountain or time trial stages to make the best of their lot, but this year may be a bit different.

Team director Nicolas Portal has said that the race will be deceptively tricky thanks to the hard stages interspersed by three summit finishes. This may hurt Team Sky’s overall performance as climbing is a definite strength in the team.

Chris Froome, team leader, has obviously not shied away from a challenge as he has previously pulled miracles out of his hat. For many he is still the top contender to take the Tour De France crown. If he does it will be his fourth win at the Tour.

He will be facing Alberto Contador, Nairo Quintana and Richard Porte in the top tiers, but these riders have many critics. Contador is one of the oldest competitors, many doubt Quintana’s killer instinct and Richie Porte can be very unreliable at the best of times. This leaves Froome still as a firm favourite this year.

He may be facing a stiff challenge from the young French rider, Romain Bardet but the cyclist may be too inexperienced yet to pose a real challenge.

The team will be the defending champs this year but almost all the team members with the exception of Michal Kwiatkowski have had a pretty rough season. Even with all the challenges ahead, Team Sky are still a top tier team and will be the ones to watch in the race this year.

This year’s race actually features a record low amount of kilometres reserved for the time trial stages.  The first trial section will start at the opening day of the Tour De France in Dusseldorf. 5 Days later will see the riders finish at the fifth stage summit in Le Planc De Belle Filles where Chris Froome established dominance for Team Sky at the 2012 Tour.

Two mountain top finishers will take place in the Pyrenees in the 12th stage with the showdown ending in Col De Izoard in the Alps on stage 18. The final day will feature a 22.5km time trial in Marseille.