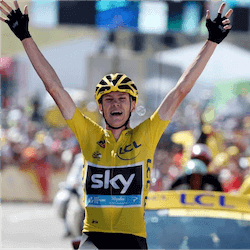 The second week of the 2017 Tour de France had plenty of ups and downs to entertain Aussie betting fans, including the first stage win by an Australian rider this year. The big news was the tussle between Astana’s Fabio Aru and Team Sky defending champion Chris Froome for the yellow jersey.

It was arguably a lack of support from Froome’s team that saw the Englishman slip off the pace dramatically at the close of Stage 12 on Thursday, allowing Aru to surge ahead an into the lead in the General Classification. But the tables were turned two days later, when the Italian’s team let him down and left him stuck at the back of the peleton in the foothills of the Massif Central.

Froome had made up 25 seconds by the time he finished Stage 14 in Rodez. This put him back in front in the GC, and he regained the yellow jersey he wore from Stages 5 to 11. The Team Sky champ hung onto his lead through Stage 15, so he goes into Monday’s second rest day ahead of the pack.

Team Sunweb rider Michael Matthews gave Aussie fans something else to crow about this week. The Canberra cyclist came up trumps in the hilly Stage 14, winning the 181.5km stage in 4 hours, 21 minutes and 56 seconds.

It’s the second Tour stage win for the 26-year-old sprinter. Last year, he won Stage 10 against determined opposition. Unfortunately, his win on Saturday didn’t put him into the Top 10 in the GC, but there are three flat stages and a time trial in the final week that could see him challenge for another stage win.

Having taken back the yellow jersey on Saturday, Froome almost hit disaster on Sunday, when he developed a puncture heading into the Col de Peyra Taillade. However, he managed to get the wheel changed and finish the 189.5km hilly stage still 18 seconds ahead of Aru, so he retains the lead in the GC.

Stage 15 was won by Dutch Trek-Segafredo cyclist Bauke Mollema, after some aggressive riding. It was his first Tour stage win. Quick-Step Floors rider Marcel Kittel still leads the Points Classification in the green jersey; the German sprinter has five stage wins so far this year.