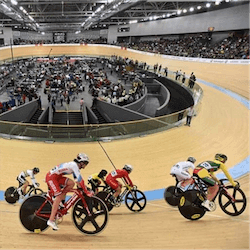 World cycling body UCI closes the 2016-17 season on April 12-16, with the 2017 UCI Track Cycling World Championships, better known to most Australian punters as the cycling World Track Championships. This year, UCI has awarded the tournament to Hong Kong, making the PRC only the second nation in Asia to host the event.

The last Asian host of the World Track Championships was Japan in 1990, so the Cycling Association of Hong Kong is delighted at the opportunity to showcase their city’s growing interest in international cycling. The event will be held on the 250-metre track in the Hong Kong Velodrome, which seats 3,000.

Australia will be fielding a team in Hong Kong, most likely including some of the 13 riders in the squad currently competing in the 2016-17 UCI Track Cycling World Cup. With one round left this month, the World Cup can give betting enthusiasts a useful preview of top riders to watch in the World Track Championships.

After three World Cup rounds, Britain and France look like favourites to take the team honours in the final round, scheduled for the Velo Sports Center in Los Angeles, USA, on February 25-26. The first two rounds were held in November in Glasgow, Great Britain and Apeldoorn, the Netherlands.

The third round just finished in Cali, Colombia. The British team had a score of 11715.0 points at the end of Round 2, making them clear favourites to clinch the World Cup over France on 9855.0 points.

Among the individual performances, Australian riders who may reward punters in the final round of the World Cup, or the World Track Championships in April, include Cameron Meyer, Sam Welsford, Courtney Field and Callum Scotson.