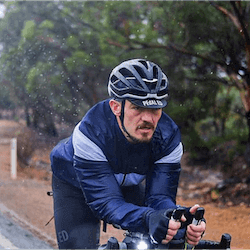 Cyclists taking part in the Indian Pacific Wheel Race have a much bigger mental challenge ahead of them as they set off across the Nullarbor. The gruelling 5500km race from Sydney to Freemantle got underway last Saturday with 70 riders attempting one of the biggest physical and mental challenges in the cycling world.

The leaders of the race have officially crossed into South Australia and are starting one of the longest and toughest rides of the race. What is so intriguing about this race is that the cyclists are doing it unsupported. According to race organiser Jesse Carlsson, the riders are completely unsupported from start to finish. Out there on the road, they look like any other bike tourer traveling across Australia.

Jesse said that the cyclists have to carry everything they need to survive on the trip. This includes all their own food, water and sleeping equipment. The Indian Pacific Wheel Race is unlike any other major cycling race. In this case the riders are alone, unsupported and must fend for themselves in some of the harshest physical conditions on the planet.

The Scenic Route Across Australia

The race has attracted cyclists from over a dozen countries with more than 70 riders aiming to cross the Nullarbor in the next few days. Starting out at Freemantle, the cyclists are now heading for Adelaide along the Great Ocean Road in Victoria. They will then head north over the Great Dividing Range and make their way to the finish line at the iconic Sydney Opera House.

As it stands, the race leaders hope to be in Sydney in the next 12 days. At this stage, the Belgian Kristof Allegaert is out front with Brit Mike Hall hot on his heels in second place. In a race of this magnitude, often mental stamina counts for more than physical ability. Race organisers say that riders often feel that the riding is the easy part. The biggest battle is mental. Even former professionals struggle after three days. In a race like this, the monotony, and boredom are the biggest challenges.