Latest News from the Giro d’Italia 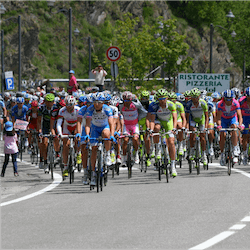 Australia’s cycling enthusiasts and online betting fans can enjoy the 2017 Giro d’Italia for the rest of May. The classic Italian cycle tour, celebrating its 100th edition this year, has only just completed its island stages in Sardinia and Sicily.

Thursday saw the start of Stage 6, the first mainland stage, in Reggio di Calabria. The riders will now meander up the Italian peninsula, criss-crossing the Appenines, the Alps and the Dolomites, before finishing in Milan on 28 May.

Stages 1, 2 and 3 were held last Friday, Saturday and Sunday in Sardinia, taking the cyclists around the island from Alghero to Olbia, then to Tortoli and finally Cagliari in the south. None of the first three stages were particularly hilly, with only the Olbia-Tortoli leg classed as medium-difficulty, so they favoured the sprinters.

Stage 1 was won by Austrian Lukas Postlberger, Stage 2 by German Andre Greipel, and Stage 3 by Colombia’s Fernando Gaviria. Gaviria took his second sprint win in Stage 5, from Pedara to Messina in Sicily.

Stage 4, the opening stage in Sicily from Cefalu to Rifugio Sapienza, was the first high-difficulty stage of the race, and it brought the mountain riders to the fore. The 181km route terminates on the slopes of Mt Etna, with plenty of steep climbs to test riders to the utmost.

Slovenian Jan Polanc, riding for UAE Team Emirates, claimed the Maglia Azzurra after he emerged the winner of this first mountain stage. Whether he can keep it in the many high-difficulty stages ahead, remains to be seen.

Despite not having won a stage yet, Gaviria’s Quick Step Floors teammate, Luxembourg’s Bob Jungels is currently wearing the Maglia Rosa, as he has the fastest time for the race overall.