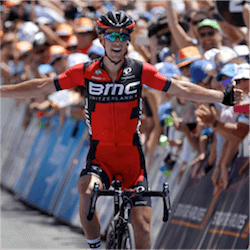 BMC Racing is making no secret of the fact that Richie Porte is their key man for the 2017 Tour de France. The 32-year-old ‘Tasmanian Devil’ is second favourite with the bookies at the moment, at around $2.10 to win the 104th edition of the famed French road race. The favourite is the British 2016 winner, Team Sky’s Chris Froome, at $1.63.

Porte will be joined by a team of eight BMC Racing riders, drawn from five other nations. The most prominent will be Belgian Greg van Avermaet, who is the best one-day rider in the world right now, and who also wore the yellow jersey briefly in 2016. He has won Olympic gold and two stages of the Tour in the past, so BMC sports director Fabio Baldato is confident that he will take a stage or two this year.

However, Baldato was very clear when talking to reporters: while BMC wants Van Avermaet to have the best race possible this year, their focus is firmly on Porte, and his shot at capturing and retaining the yellow jersey.

To that end, the other seven riders in the BMC Racing colours will spend their Tour de France supporting and protecting Porte at all costs. They are Italy’s Damiano Caruso and Alessandro de Marchi, Ireland’s Nicolas Roche, France’s Amael Moinard, and Switzerland’s Danilo Wyss, Stefan Kung and Michael Schar.

Caruso and Roche will be staying at Porte’s shoulder in the highest mountain passes, with De Marchi and Moinard taking over before and between the medium mountain stages. Kung, Schar, Wyss and Van Avermaet are the sprinters; there to protect Porte in the fast, difficult flat stages.

Some Other Tour Contenders

Punters considering their bets before the 1 July start of the 2017 Tour shouldn’t rule out Movistar’s Nairo Quintana. The Colombian finished third in last year’s race, and he is currently being offered to win this year at around $7.50. Trek-Segafredo’s Alberto Contador is at $16.00.

With British rider Mark Cavendish back from his battle with the Epstein-Barr virus, team Dimension Data might also be worth some consideration by punters. The 32-year-old sprinter is unlikely to take the yellow jersey, but he needs only four more Tour de France stage wins to equal Eddy Merckx’s record of 34. So he will be certainly be pushing hard in the time trials and flat stages.