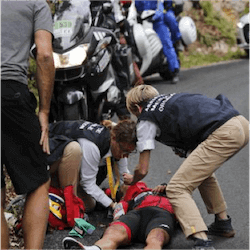 It seems odd to describe an accident that leaves a cyclist with a fractured pelvis and shoulder as ‘lucky’, but considering what might have happened, Richie Porte was indeed fortunate to escape the crash that put him out of the 2017 Tour de France with no more than two broken bones. He basically smacked into a cliff wall at around 70km/h; were it not for his guardian angel, the famed cycle tour might have claimed another fatality.

Cruelly, the smash happened on a stage where the BMC Racing star was within reach of snatching the yellow jersey from defending Team Sky champion Chris Froome. At the end of Stage 8, Porte was lying fifth in the general classification, but only 39 seconds in total behind Froome in the lead. Through most of mountainous Stage 9, and especially on the final climb, Porte looked like he was riding away from Froome.

However, on the final downhill, damp roads and too much speed proved Porte’s downfall on a slippery corner. After sliding off the tarmac, he then ricocheted back across the road into the cliff face, and went down in a tangle with Irish rider Daniel Martin.

Thomas Also Crashes Out with an Injury

The other casualty of Stage 9 was Froome’s teammate Geraint Thomas. He had to withdraw from the Giro d’Italia earlier this year after crashing into a police motorcycle, so it was a doubly bitter blow for the Welshman.

Ironically, he was also lying second in the GC when he crashed in Stage 9 of the Giro; exactly his situation in the Tour de France on Sunday. Thomas’s accident occurred before Porte’s, and it was also a descent that was his undoing. He collided with Polish rider Rafael Majka and broke his collarbone in the subsequent fall.

Froome Hangs on to Yellow Jersey

Colombian rider Rigoberto Uran won Stage 9, although it took a photo-finish to separate him from French cyclist Warren Barguil. However, as the riders headed into Monday’s first rest day of the Tour, Froome was still in possession of the yellow jersey. He is 18 seconds ahead of his nearest GC rival: Italian Astana cyclist Fabio Aru.