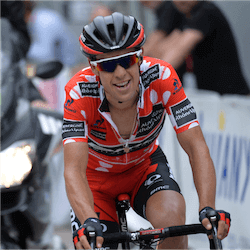 Australian cycling star Richie Porte is still second in the 2017 Tour de France betting behind defending champion Chris Froome, but he has closed the gap in the odds considerably on the Team Sky rider with his runner-up finish at the Criterium du Dauphine on 11 June.

The Tasmanian Devil, who rides for BMC Racing, came achingly close to winning the event in south-eastern France. He took his first victory in Stage 4’s individual time trial, then took the yellow jersey at the end of Stage 6. He held it through Stage 7, starting the final stage 75 seconds ahead of Danish Astana cyclist Jakob Fuglsang.

On mountainous Stage 8, from Albertville to the finish at Plateau de Solaison, the Dane hauled Porte in, to win the race by 10 seconds. A great final stage from Irish rider Dan Martin for Quick-Step Floors then saw him pip Froome for third place, leaving the British rider in fourth.

As a result, Froome is no longer at even money in Tour de France betting. He’s still the favourite, but punters can now get around $1.60 on him for a win. Porte’s odds have reduced from $5.00 to $2.00, followed by Nairo Quintana of Movistar on $7.50 and Trek-Segafredo’s Alberto Contador on $16.00.

Fuglsang’s obvious facility with mountainous terrain has also seen his odds for the Tour de France improve, to $18.00.

All the Mountain Ranges Again

For the first time in 25 years, the Tour will visit all five of France’s major mountain ranges: the Vosges, the Jura, the Pyrenees, the Central Massif and the Alps. This year’s route is 3,540km long.

Germany will host the start, for the fourth time in the race’s history. The first stage is a 14km individual time trial in Dusseldorf on 1 July, followed by a 203.5km flat stage to Liege in Belgium the next day.

The route then winds through Belgium, Luxembourg and eastern France, breaking at Chambery in the Alps after Stage 9, so that teams can fly to Dordogne on their first rest day. The next stages wander south into the Pyrenees, before turning east over the Central Massif and back towards the Alps.

Stage 20 in Marseille on 22 July is another individual time trial, after which the riders all fly to Montgeron for the final stage on 23 July: a 103km flat sprint to the Champs-Elysees in Paris.