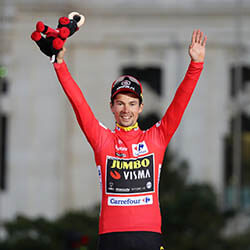 Slovenian rider Primoz Roglic has won his first Grand Tour as Fabio Jakobsen claimed the final stage of the Vuelta e Espana that took place in Madrid. 23-year-old Jakobsen took the second stage win of the race after narrowly outpacing Sam Bennett in the difficult final sprint. The Irishman had found himself boxed in, and despite closing on the leaders quickly, he was unable to catch up and add to this previous two victories.

Jumbo Visma’s Roglic, who is 29, finished two minutes and 16 seconds in front of Spanish Alejandro Valverde. Roglic has become the first Slovenian in history to win a general classification in one of the sport’s three Grand Tours: The Tour de France, The Giro d’Italia, and the Vuelta. He has since taken over the leader’s red jersey after he wont he individual time trial for stage 10, and was the favourite for the stage and put at least a minute and a half of leading time in front of all of his main rivals.

It proved to be a good day for Slovenia as 20-year-old Todej Pogacar of the UAE Team Emirates joined Roglic on the podium, taking third place, as well as winning the young rider category. Spain’s Jesus Ezquerra proposed to his girlfriend halfway through the race after producing a ring, to which his girlfriend said yes. The final result saw Fabio Jakobsen finish in 2 hours and 48 minutes, with Sam Bennet ending with the same time.