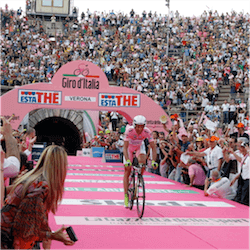 In the world of competitive cycling, the Giro d’Italia (tour of Italy) is considered to be one best races in the world. 2017 is a special year for the race, as it gets ready to celebrate its 100th edition. The race will kick off on the 5th of May 2017 with the Grande Partenza (big start) leaving Sardinia in Alghero on a lengthy 203km race to Olbia. The overall winner of the Giro d’Italia will be crowned three weeks later at its conclusion in Milan on the 28th of May.

The 2017 edition of the Giro d’Italia will showcase some of the most famous mountain passes in the world. These include popular Italian Grand Tour climbs like Umbrail Pass, Mortirolo, Stelvio, Blockhaus and Mont Grappa. This year there will be a total of six mountaintop finishes, which will certainly shake things up in the overall classification. The first summit finish is the 108km stage 4 beginning in Cefalù. The leg will pass an assent over Portella Femmina Morta and finish on the slopes of Etna.

Five King of the Hill Accents in Stage 18

Stage 9 will see the Peloton start off in Montenero di Bisaccia. The relatively short 139km leg will end with a 30km climb up to the famous Blockhous. Stage 14 will kick off in Castellania. This is one of the shortest stages of the competition at 131km. Stage 14 will give the riders a bit of reprieve from the hills as they glide their way towards their final ascent to Oropa. Stage 17 is one of the longer legs in the competition at 219km. Beginning in Tirano, the stage ends with a gradual climb to Canazei.

Stage 18 of the Giro d’Italia is a climber’s dream starting in Moena and finishing at Ortisei/St. Urlich. The 137km stage will include five King of the Hill accents over Passo Valparola, Passo Pordoi, Passo di Pinei, Passo Gardena, Panidersattel and finally the Pontives up to the finish line. Stage 19 is another lengthly 191km race from San Candido/Innichen to Piancavallo.

The second last stage will see the Pelton starting out at Pordenone and heading for Asiago. The 190km race will test the cyclist’s physical and mental endurance as the end comes into site. The final stage will kick off in Monza and finish in Milan after a 28km time trial.