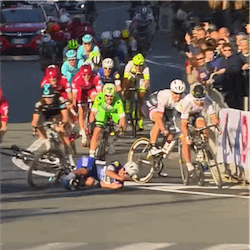 Four stages into the 2017 Tour de France, the epic cycle race had already claimed two scalps, and the riders still had to get through five more stages of gruelling cycling before their first rest day on Monday, 10 July. Tuesday’s Stage 4, a 207.5km flat stage from Mondorf-le-Bains in Luxembourg to Vittel in Vosges, eastern France, ended in high drama during the final sprint.

Slovakian sprinter Peter Sagan, the 2015 and 2016 World Road Race Champion, has been disqualified after appearing to deliberately elbow Dimension Data’s Mark Cavendish in the final sprint into Vittel. The Briton, who has been out of racing for some time recovering from a dislocated shoulder, crashed heavily into the barrier and required medical attention.

Cavendish required stitches and an X-ray, and appeared at the end of the stage with his hand bandaged and his arm in a sling. He’s aggravated his shoulder injury, and is not optimistic about his chances of continuing. Sagan insisted he had no chance to react when Cavendish came from behind, and without the option to go left, he ‘had to defend’.

Although he apologised to Cavendish, officials decided his action warranted disqualification, so the Bora-Hansgrohe rider lost his chance to equal Erik Zabel’s record of six consecutive points classification Tour de France titles. It was a bitter blow, just a day after Sagan had won Stage 3, at the first mountain summit finish in Longwy.

The 14km individual time trial in Dusseldorf, Germany, that kicked of the Tour on Saturday, produced several crashes and the first casualties of the race: Movistar’s Alejandro Valverde and Bahrain-Merida’s Ion Izagirre were both forced to withdraw after serious spills. But it was a brilliant stage for the UK’s Team Sky rider Geraint Thomas, who became the first Welshman in history to wear the yellow jersey.

Stage 2, a flat stage from Dusseldorf to Liege in Belgium, was won by German Quick-Step Floors rider Marcel Kittel. Sagan took Stage 3, but after the drama in Vittel, French FDJ cyclist Arnaud Demare emerged as the winner of Stage 4.

Nevertheless, the time lead Thomas built up in Stage 1 saw him through, and he had finished well enough every day to retain the yellow jersey through the first four stages. His teammate and the defending champion, Chris Froome, remains the odds-on outright favourite, at around $0.75, but at odds ranging from $20.00 to $37.00, Thomas might be a viable alternative bet.