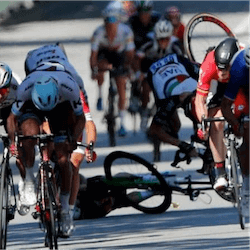 Stage 5 of the Tour de France on Wednesday saw Team Sky maintain their lead in the general classification, albeit with a switchover between teammates. Welshman Geraint Thomas had been leading the GC since he won the race’s opening time trial in Dusseldorf. He had held onto the yellow jersey through Stages 2, 3 and 4, despite those stages being won by Marcel Kittel, Peter Sagan and Arnaud Demare, respectively.

Stage 5 saw Geraint’s English teammate Chris Froome, chasing four wins in five years and his third in a row, power past the Welshman to finish as GC leader by 12 seconds. He did not win Stage 5, however. That honour went to Fabio Aru, racing for Astana. A brilliantly timed attack in the final climb at the end of the hilly stage to La Planche des Belles Filles put the Italian rider over the line first, with Froome finishing third behind Ireland’s Daniel Martin for Quick-Step Floors.

Stage 5 also brought ominous news for Australian cycling fans. Local hero Richie Porte, despite being third-favourite in the Tour outright betting at around $5.00, is going to need much more consistent support if he is to challenge for the yellow jersey. The BMC Racing team were impressive early on in the stage, racing ahead of the peleton.

However, they ran out of puff in the last big incline to the finish and fell back. That left Porte struggling alone against the rest, particularly a well-supported Froome. The Australian finished fourth, which left him fifth in the GC.

Thursday’s Stage 6 was a flat 216km from Vesoul to Troyes. Despite the absence of hilly terrain, the midsummer heat took its toll on the sprinters, and the early breakaway trio of Frederick Backaert (Wanty-Groupe Gobert), Vegard Stake Leangen (UAE Emirates) and Perrig Quemeneur (Direct Energie) couldn’t hold their lead in the final three kilometres.

German Quick-Step cyclist Marcel Kittel came out on top, achieving his second stage win this year. However, he didn’t do enough to unseat any of the riders at the top of the GC. Froome remains in the lead by 12 seconds, with outright odds of around $0.60. Thomas is second in the GC, although not fancied that much in the betting at around $50.00, with second-favourite Aru, at $4.00, still placed third. Martin is lying fourth, with odds of around $25.00.