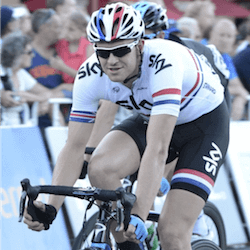 British rider Ian Stannard has signed a three year extension contract with Team Sky.  Stannard has been part of Team Sky since their very first season back in 2010, and fans as well as his fellow team-members are bound to be pleased about the extension.  Stannard too, has expressed his gratitude at being able to remain a part of a world-class team, saying that Team Sky truly looked after its riders, listening to their queries and involving team members in important decisions.  He said that this was vital in races such as the Classics, which was where his interests lay.

Stannard has had a disappointing 2017, having had to sit out of this year’s Tour de France as a result of having been plagued by illness.  Despite for the Tour disappointment, he seemed elated at the opportunity of being at Vuelta – even if only to mainly support team favourite Chris Froome in the 2017 run.

Never one to dwell too long on disappointments, Stannard already has his sights firmly set on next year’s cycling season.  Stannard is accustomed to podium finishes, having made podium in 2016 at the Paris-Roubaix as well as having finished in first place at the Omloop Het Nieuwsblad Elite on two separate occasions.

Despite the obvious disappointment of not having been able to compete in the 2017 Tour de France, Stannard has said that it had been nice and refreshing to have had a bit of time off and away from the action.

Failure To Perform At Classics

Ironically, despite their absolute overpowering dominance at the Tour de France, Team Sky’s performance at the Classics has not been quite as exemplary, having managed only a single Monument win since coming into being in 2010.

Stannard has said that he believed it to be crucial to not merely be caught staring at your power meter during the Classics, as this would only result in becoming a permanent watts-watcher instead of performing at maximum capacity.  Stannard also voiced that the transition from support rider to the one being supported, had been a difficult shift to make in his mind as it was much easier riding being in a supporting role than relying on others for that same support.  One had to move past the mental idea that it was a selfish act.

Concerning the Classics, Stannard is of the opinion that 2018 will be Team Sky’s year for the very fact that experience pays.