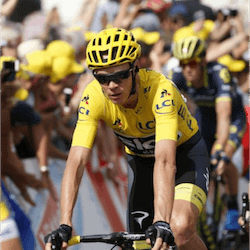 Just four days after crashes removed both BMC Racing’s Richie Porte and Team Sky’s Geraint Thomas from the competition, Sky teammate Chris Froome’s dream of taking his third Tour de France in a row, and his fourth in total, hit an obstacle. As obstacles go, the high Pyrenees are quite daunting, and with Thomas’ departure seemingly leaving a hole in Froome’s support, the English rider lost the General Classification lead to Astana’s Fabio Aru.

Froome has yet to win a stage in the 2017 Tour, so his hold on the yellow jersey was growing more tenuous every day. For six hours, Team Sky led the 214.5km stage to Peyragudes at a cracking pace. But in the final 200m climb up the mountain runway made famous in the action movie Tomorrow Never Dies, Froome’s support disappeared.

Visibly struggling up the 1-in-5 incline, Froome watched both Aru and AG2R La Mondiale rider Romain Bardet streak past him, followed by four other cyclists. Bardet crossed the line first, taking his third Tour stage win in his five-year professional career. Aru finished fast enough to place third behind Colombia’s Rigoberto Uran, and the Italian snagged the GC lead as a result of Froome’s finish in seventh.

GC Top 4 All within 1 Minute

Friday’s Bastille Day Stage 13 is another hard trek through the mountains, over 101km from Saint-Girons to Foix. Aru is going to have to fight hard to hang onto the yellow jersey, as his nearest three rivals in the GC are less than a minute behind him.

Froome is still closest, just six seconds behind the Italian, but he lost 22 seconds in Stage 12, so unless the support from his team ramps up a notch, Friday’s climbs will not help him. Bardet, a mountain specialist, finished Stage 12 just 25 seconds behind Aru, and he is hungry to put on the yellow jersey as soon as possible.

Uran took a bottle from a spectator during Stage 12, resulting in a 20 second time penalty. Despite that, the Cannondale rider is fourth in the GC, 55 seconds behind Aru. He’s an all-rounder with plenty of climbing experience at home, so he will also be closing in on the Astana star during mountain stages.